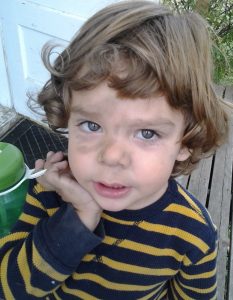 I found a note I wrote six ½ years ago describing how I found the spine of a squirrel that I am now using as a model for a sculpture I am currently working on. The story now makes me chuckle because I remember feeling completely unprepared to answer my son’s questions regarding the topic of death. He was only 3 ½ years old.

Death is a universal reality that preoccupies every individual on earth, and our first confrontation to the idea of mortality surely shapes the way we understand and experience our time on this earth. It is, after all, a big piece of the basic knowledge that we pass down to our kids. Looking back now, I realize that death awareness must go hand in hand with a developed sense of self. At the time I felt unprepared for a well-crafted answer, but now I believe that one of the most fascinating and rewarding aspects of being a mother is the opportunity to rediscover the world and review my real views and opinions about it. Here is the note of the adventure that introduced my son to the idea of mortality.

A little over a month ago, while taking the usual break to collect our 3 1/2-year-old son from Montessori, we came across a dead squirrel that had been run over by a car. Our son stopped, looked at it for a while, and asked what was wrong with it and why it was not moving and acting like squirrels do. I told him the squirrel had been run over and died, and what he was looking at was no longer the squirrel. “If the squirrel isn’t there anymore, then where is it?” I said it had gone to where the moon, the sun and the stars lived. He seemed uncertain, and perhaps this answer will do for a while.

He seems to be more appreciative of squirrels and cautions them to beware of cars.

A few days later, while passing the same spot, I noticed that an animal, perhaps a crow or a magpie, had been pecking at the squirrel and its entire spine lay intact next to it.

Bones have been central to my work for many years now, and finding a good specimen is not an easy task, so a finding such as this is invaluable. I went to the studio for some tweezers and a bag and returned to collect my discovery; to clean it, number it and store it under the name ‘ode to a squirrel.’ 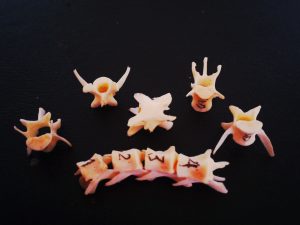